The Victoria Charleston and the Wiltshire Liberal Democrats have written to John Glen MP to express our severe concern over the handling of the People Friendly Salisbury scheme.

This comes after it has been revealed that the decision to reallocate Salisbury's £1.3M funding to other parts of Wiltshire had already been made by the SWLEP.

Liberal Democrat Spokesperson for Salisbury, Victoria Charleston challenged Glen to explain if he and his fellow Conservative colleagues were aware that they might jeopardise the £1.3M investment, when withdrawing support for the Low Traffic Zone.

Charleston has called on Glen to explain how he plans to ensure further funding to Salisbury via the CAF is not jeopardised as a consequence of the poor handling of this scheme. 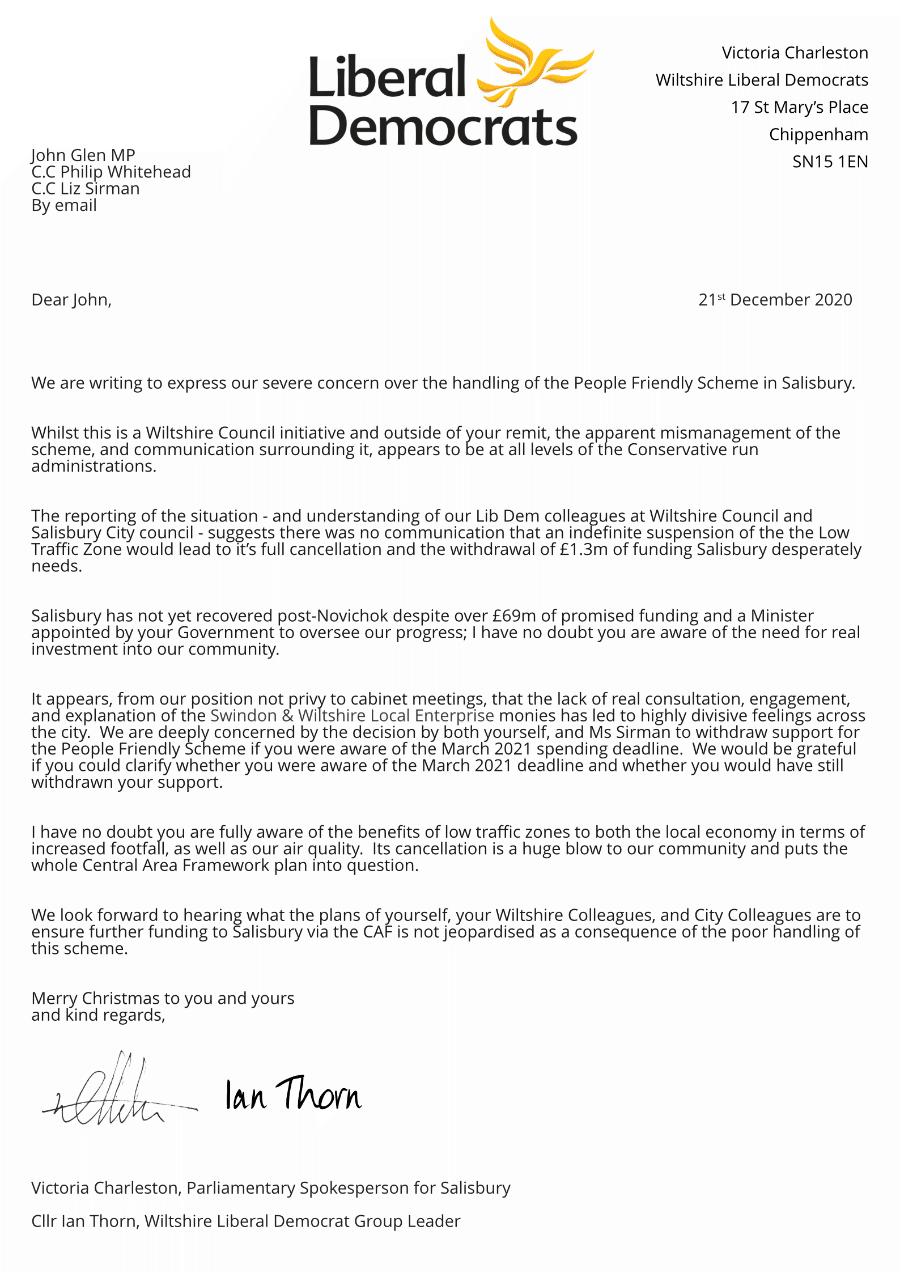 We are writing to express our severe concern over the handling of the People Friendly Scheme in Salisbury.

Whilst this is a Wiltshire Council initiative and outside of your remit, the apparent mismanagement of the scheme, and communication surrounding it, appears to be at all levels of the Conservative run administrations.

The reporting of the situation - and understanding of our Lib Dem colleagues at Wiltshire Council and Salisbury City council - suggests there was no communication that an indefinite suspension of the the Low Traffic Zone would lead to it’s full cancellation and the withdrawal of £1.3m of funding Salisbury desperately needs.

Salisbury has not yet recovered post-Novichok despite over £69m of promised funding and a Minister appointed by your Government to oversee our progress; I have no doubt you are aware of the need for real investment into our community.

It appears, from our position not privy to cabinet meetings, that the lack of real consultation, engagement, and explanation of the  Swindon & Wiltshire Local Enterprise monies has led to highly divisive feelings across the city.  We are deeply concerned by the decision by both yourself, and Ms Sirman to withdraw support for the People Friendly Scheme if you were aware of the March 2021 spending deadline.  We would be grateful if you could clarify whether you were aware of the March 2021 deadline and whether you would have still withdrawn your support.

I have no doubt you are fully aware of the benefits of low traffic zones to both the local economy  in terms of increased footfall, as well as our air quality.  Its cancellation is a huge blow to our community and puts the whole Central Area Framework plan into question.

We look forward to hearing what the plans of yourself, your Wiltshire Colleagues, and City Colleagues are to ensure further funding to Salisbury via the CAF is not jeopardised as a consequence of the poor handling of this scheme.

Merry Christmas to you and yours and kind regards,