In a letter to the new leader of Wiltshire Council, Victoria Charleston, the Lib Dem Parliamentary Spokesperson for Salisbury has called for a holistic review of all traffic and travel options within Salisbury.

The Liberal Democrats launched a campaign demanding an end to the traffic chaos in Salisbury in August 2020. A petition called for Wiltshire Council to dust off the debate about a bypass and to consult on the needs of pedestrians, cyclists, and motorists, whilst exploring opportunities to utilise Park and Ride sites.  The Liberal Democrat local election campaign, which saw their numbers dramatically increase on Salisbury City Council and push the administration into No Overall Control, was centred on transport solutions for Salisbury.

“I am delighted that pressure from Liberal Democrats has forced Wiltshire Council to act on the big issues for local residents.  We must now make sure that Salisbury is properly consulted before any big measures are taken. I have written to Cllr Clewer urging a holistic review of all traffic and travel options within Salisbury.

“We need a city with transport fit for the 21st century and I am happy that the pressure from myself and my Lib Dem colleagues have put these issues on the agenda and forced Wiltshire Council to act.” 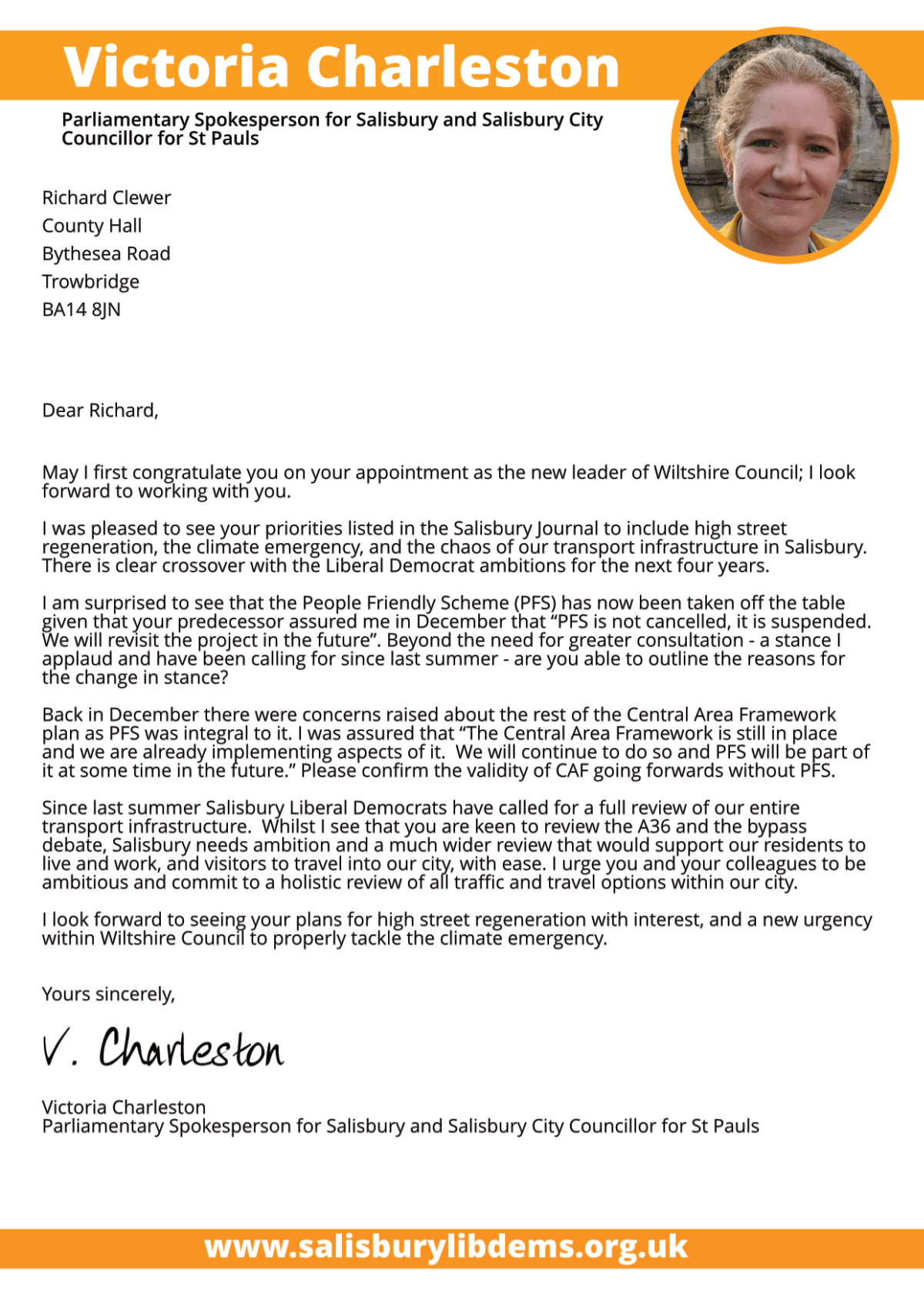 May I first congratulate you on your appointment as the new leader of Wiltshire Council; I look forward to working with you.

I was pleased to see your priorities listed in the Salisbury Journal to include high street regeneration, the climate emergency, and the chaos of our transport infrastructure in Salisbury. There is clear crossover with the Liberal Democrat ambitions for the next four years.

I am surprised to see that the People Friendly Scheme (PFS) has now been taken off the table given that your predecessor assured me in December that “PFS is not cancelled, it is suspended. We will revisit the project in the future”. Beyond the need for greater consultation - a stance I applaud and have been calling for since last summer - are you able to outline the reasons for the change in stance?

Back in December there were concerns raised about the rest of the Central Area Framework plan as PFS was integral to it. I was assured that “The Central Area Framework is still in place and we are already implementing aspects of it.  We will continue to do so and PFS will be part of it at some time in the future.” Please confirm the validity of CAF going forwards without PFS.

Since last summer Salisbury Liberal Democrats have called for a full review of our entire transport infrastructure.  Whilst I see that you are keen to review the A36 and the bypass debate, Salisbury needs ambition and a much wider review that would support our residents to live and work, and visitors to travel into our city, with ease. I urge you and your colleagues to be ambitious and commit to a holistic review of all traffic and travel options within our city.

I look forward to seeing your plans for high street regeneration with interest, and a new urgency within Wiltshire Council to properly tackle the climate emergency.